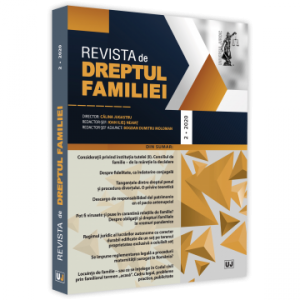 As the legislator uses the communication presumptions of the citation, we tried to harmonize the communication presumptions with the mechanism of formation of the abusive refusal to consent to adoption. In this sense, we argued that the procedure of citation realized by display or by putting the citation in the mailbox, cannot create the premises of appliance of the rules from the abuse under the aspect of formation of the volitional element, in the procedure of opening the adoption of the underage child.

DIVORCE BASED ON LONG TERM SEPARATION OF SPOUSES. SUBSTANTIAL AND PROCEDURAL ASPECTS   Abstract In the current paper we aimed to analyze, as exhaustive as possible, from both the perspective

CHILD’S MARRIAGE. “SWEET 16”. A COMPARATIVE VIEW   Abstract Child marriage is a problem that crosses the globe, religions, cultures or ethnicities. The child-husband, especially the child-wife are found from